Garnet is a light red to deep red crystal. It has a glass-like luster and can be translucent to opaque. This crystal can be found raw or tumbled. In its natural state, garnet may have a rough, spherical shape that ranges from deep red to brown-red.

A popular stone found all over the world, Garnet has been used for centuries by emperors, knights, and warriors as a protective Talisman; by Hindu and Buddhist followers as a holy stone of enlightenment; as well as by North and South American Indigenous, Aztec, Mayan, and African Tribal cultures.

The "flash" and "fire" of Garnet inspires a sense of lightness and brightness, illuminating to dark places and dark souls. Garnet's fire stimulates the survival instinct, bringing willpower and courage to a situation. Garnet will quickly "light a fire" under you, bringing those internalized ideas and feeling you have to the surface to be acted upon and carried out.

Garnet is a good stone for depression, bringing joy and hope to you, and it helps lessen anger, especially towards yourself.

Powerful Garnet can cleanse the chakras of negative energies and re-energize them.

Use Garnet to balance the Sacral Chakra and sex drive, and to aid in the controlled rise of Kundalini energy.

Garnet inspires love and passion, devotion and loyalty. A stone of commitment, Garnet encourages personal relationships of all kinds, and is a useful relationship tool both personally and in business.

For more information on the various types of Garnets please click: More about the Wide Variety of Garnets 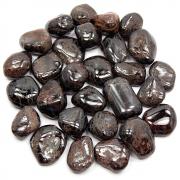 Click here to see all items related to Garnet in our online catalog.