Moss Agate is considered a “birthing” crystal that can assist midwives in their work.  It helps to release old habits and promote forgiveness.  It also attracts wealth and abundance, improves self-esteem, and helps to calm and release fears.  Moss Agate also comforts and soothes emotional wounds.  Use Moss Agate to balance the Heart Chakra when releasing stress.

Physically, Moss Agate may help with depression, especially when caused by brain imbalances. It cleanses and detoxes the circulation and elimination systems of the body.

In general, Agates carry a quiet energy that works on the subtle bodies, and are great for achieving stability and balance in many aspects of one’s life.  Agates tend to work behind the scenes on the cause, instead of the symptom, of an issue.  Agate is believed to improve mental functions and can help where issues of clarity and stability are concerned.  Agate is also helpful in overcoming negative emotions by bringing love into the chakras.  Although they work very slowly and deliberately, this gentle nature of Agate helps them to have a lasting impact. 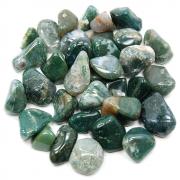 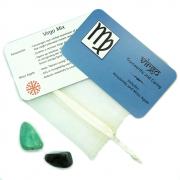 Click here to see all items related to Moss Agate in our online catalog.