Online Crystal Sale in our Facebook Group - May 16 at 3:30pm EST

Tourmalated Quartz, also called Tourmalinated Quartz, shares the properties of its components – the grounding and deflection of negative energy found in Tourmaline, as well as the energy amplification and consciousness raising ability of Quartz. Tourmalated Quartz can help bring balance to the Yin and Yang energies, and is often used as a good luck charm.

The combination of Clear Quartz and Black Tourmaline creates a powerful ally in one's spiritual growth. While the Quartz can be an aid to those on the spiritual path, the Black Tourmaline can help keep one well-grounded, thus avoiding that out-of-touch sensation that can often result from being too focused on the higher pursuits. Black Tourmaline in Quartz can also help one to avoid picking up negative vibrations from the environment or other people, making it a great crystal for one's pocket or purse. Tourmalated Quartz is loved by crystal healers for its energetic cleansing effect on the aura, and is great for energy healing sessions and grid work.

Black Tourmaline, or Schorl, which is most commonly the type of Tourmaline found in Tourmalated Quartz, is a well known stone in metaphysical circles. Used for grounding and clearing, Black Tourmaline is also exceptional at blocking and transmuting negativity, making it a wonderful stone for releasing fear and worry, and for protection of one's energy field. Black Tourmaline is also used for clearing away electromagnetic pollution from sources such as computers and cell phones. 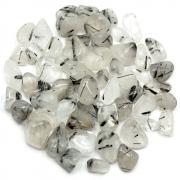 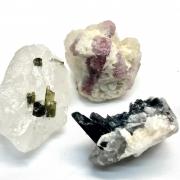 Click here to see all items related to Tourmalated Quartz in our online directory.