This month we are featuring 5 wonderful articles helping to define the differences between some similar stones:

And this month's feature article is: What is the difference between Blue Quartz, Blue Dumortierite and Blue Aventurine?

Understanding the differences between Blue Quartz, Blue Dumortierite and Blue Aventurine can be confusing. They are all blue and many times look very similar, so how do you tell them apart? The most important factor is the inclusions of various elements/minerals within each.

Let's begin with an analogy. The Earth creates crystals like a chef bakes a cakes. Let's say that you decide to bake three cakes. For the first cake, you add the ingredients following a recipe. You mix sugar, butter, flour, and eggs (elements). You then put it in the oven (location) at a specified temperature for a period of time. When it is done, you put it on the counter to cool. The second cake calls for the same ingredients (elements) with the addition of vanilla extract. You again mix the elements, bake in the oven (location) and remove. It sits next to cake one to cool. The third and final cake uses sugar, butter, eggs, milk and cornmeal (elements). You adjust the temperature of the oven (location) and the baking time. When it is completed, you again sit this cake to cool by the others.

All three cakes look quite similar. You cannot SEE the butter, sugar or eggs, but they are there nonetheless. These ingredients or elements, all slightly differ. The cakes may all look similar, but taste different from each other.  This is very similar to the way that the Earth creates different types of crystals.

So let’s take a look at our blue crystal friends one-by-one. 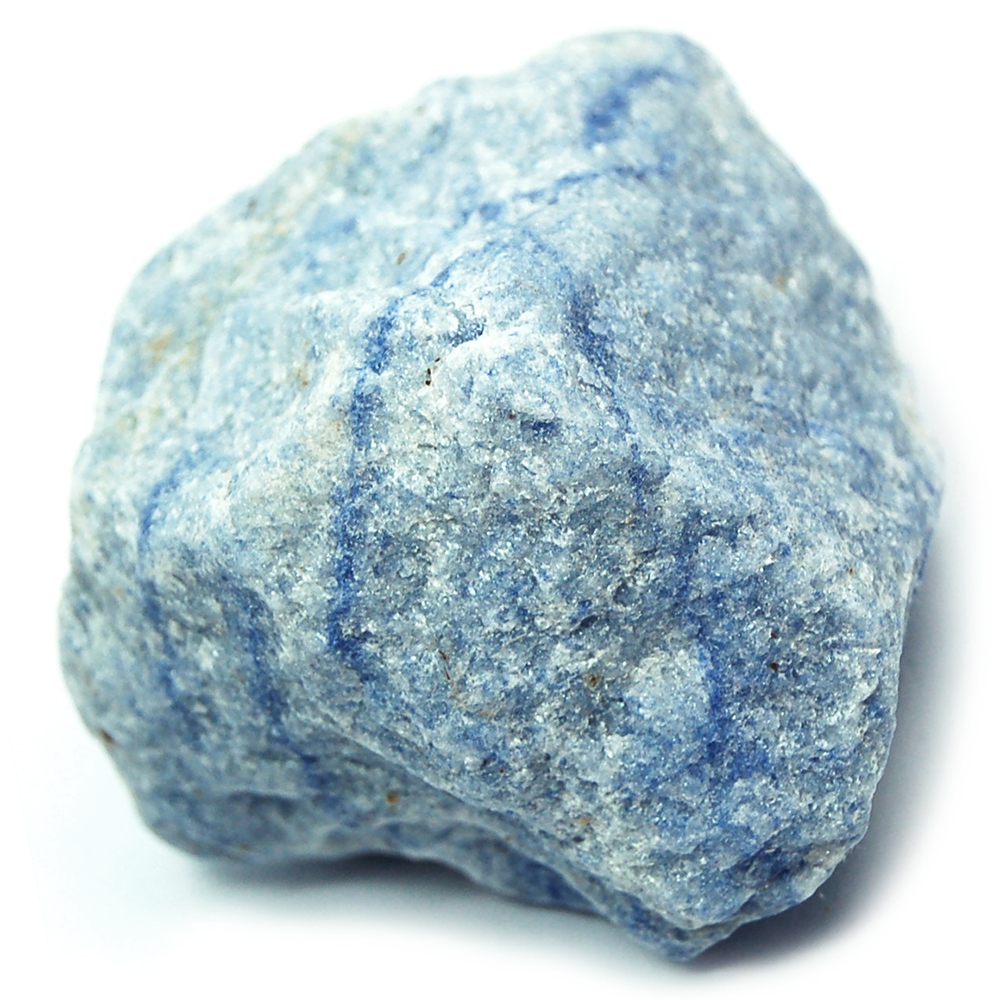 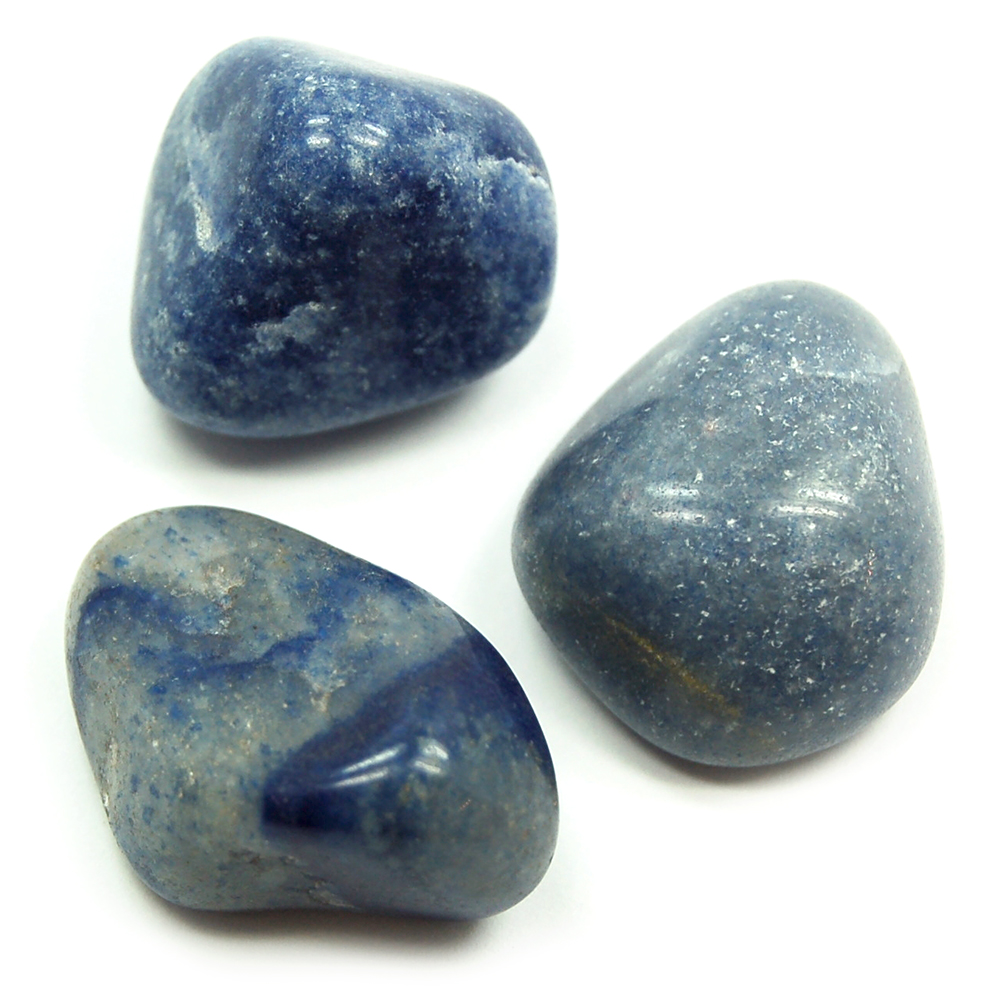 Blue Quartz’s main ingredient is Quartz. The addition or inclusion of a blue colored element will turn the quartz a lovely blue shade.

There are two types of Blue Quartz:

The first type is when Inclusions or impurities appear as phantoms or needle like pieces within the quartz crystal itself. The inclusions in this case would be Blue Tourmaline, also called Indicolite, or Magnesioriebeckite. The Blue Quartz inclusions are opaque (solid, no light can pass through) to translucent (permitting a small amount of light to pass through).

The second type of Blue Quartz is what is called massive, or in laymen’s terms, a really big chunk of rock. In this case, a large area of quartz is embedded during the growth process with blue minerals/crystals such as Dumortierite. This colors the entire specimen blue. In other words, Quartz is the main ingredient and Dumortierite would be a secondary mineral.

Blue Quartz is a member of the Quartz family (SiO2) Silicon Dioxide with a hardness of 7. It is found in a variety of locations within the US, as well as Australia, Austria, Brazil, Zaire, Russia, Spain, Sweden and Switzerland. 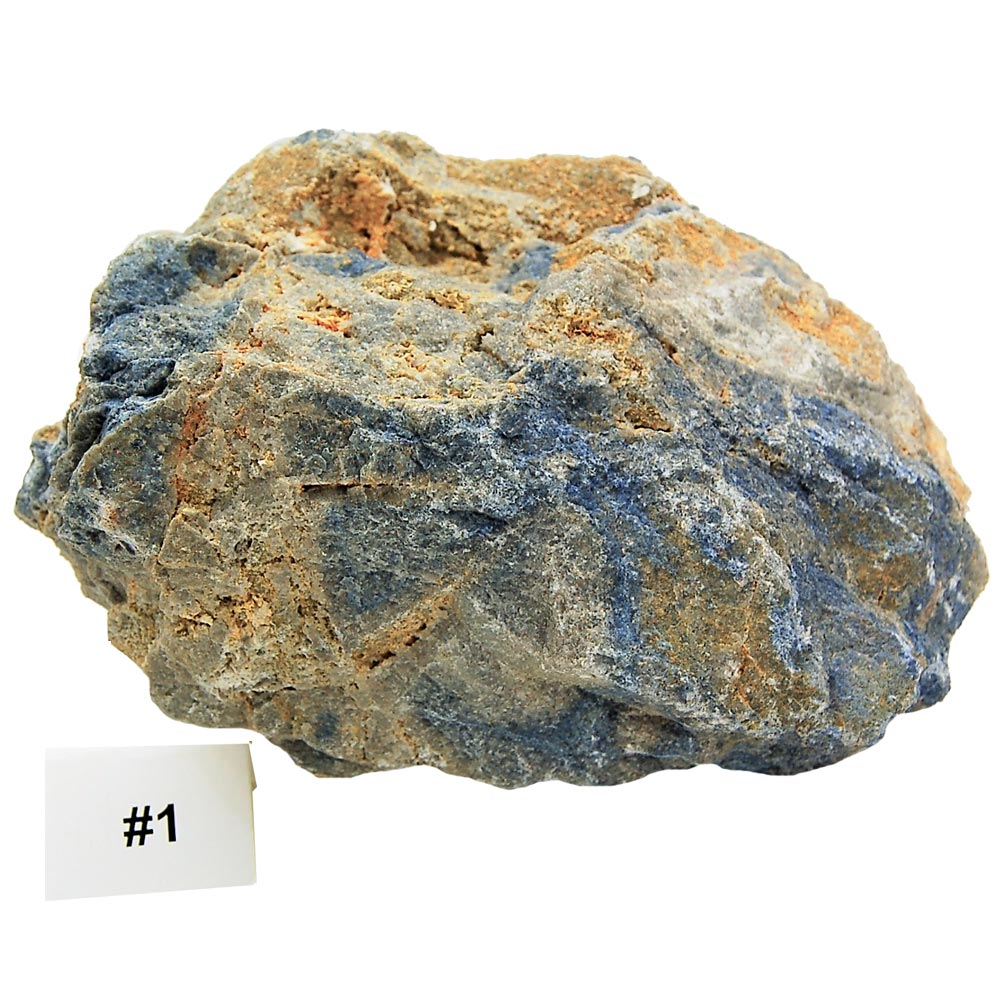 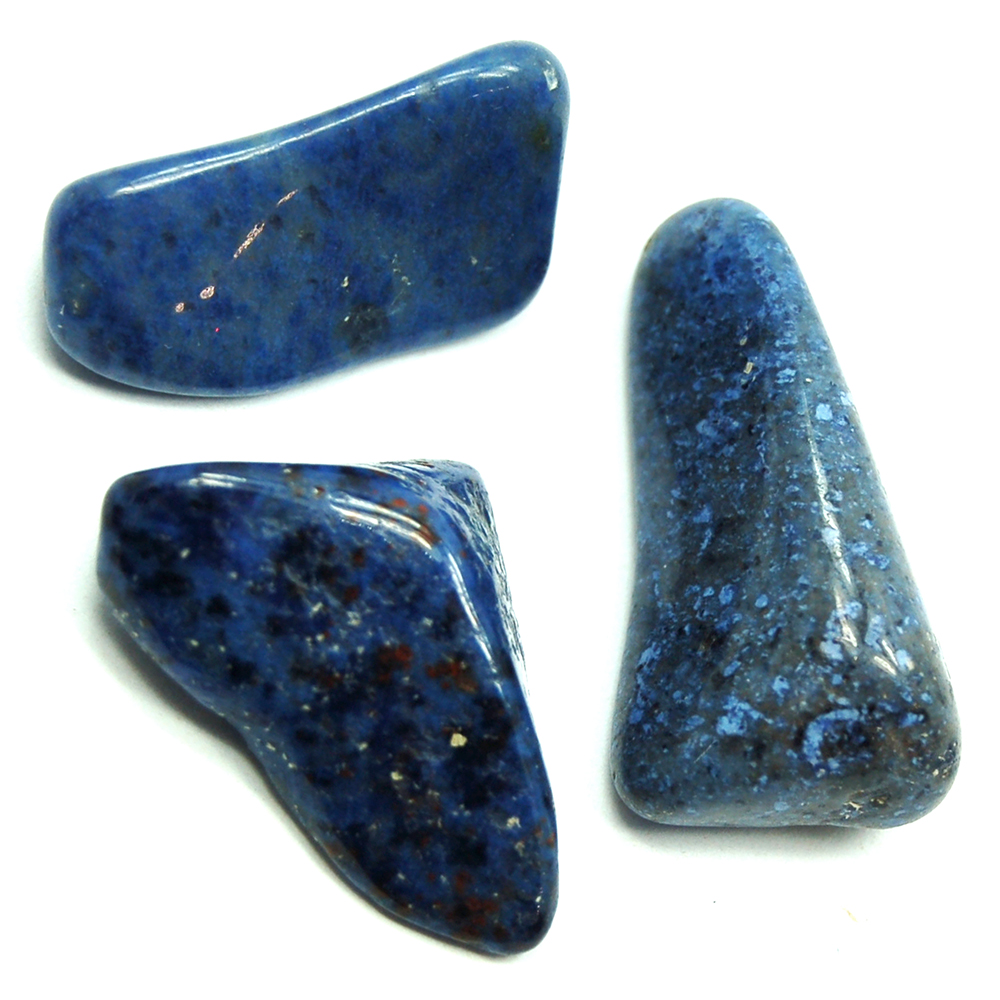 Dumortierite is a Boro-silicate mineral, which means simply that it has quite a few more “ingredients” in its make up. Aluminum is the most prominent element here, with Boron, Silicon, Hydrogen and Oxygen playing the supporting roles.

Dumortierite is a deep blue to violet in color and is sometimes called “Desert Lapis”. Dumortierite is also opaque (solid, no light can pass through) to translucent (permitting a small amount of light to pass through). Dumortierite can grow in a massive (huge chunks) formation, columnar (like tourmaline) or fiber like fans. It may also contain other inclusions, such as Iron, Titanium, Magnesium or Calcium, which will add interesting spots or splotches to the specimen.

In some respects, Dumortierite looks very similar to Sodalite. The difference in appearance is that Sodalite has white streaks, while Dumortierite does not. In China, Dumortierite is often used as imitation Lapis Lazuli for carvings. It is very easy to see how this lovely piece can so readily be confused! 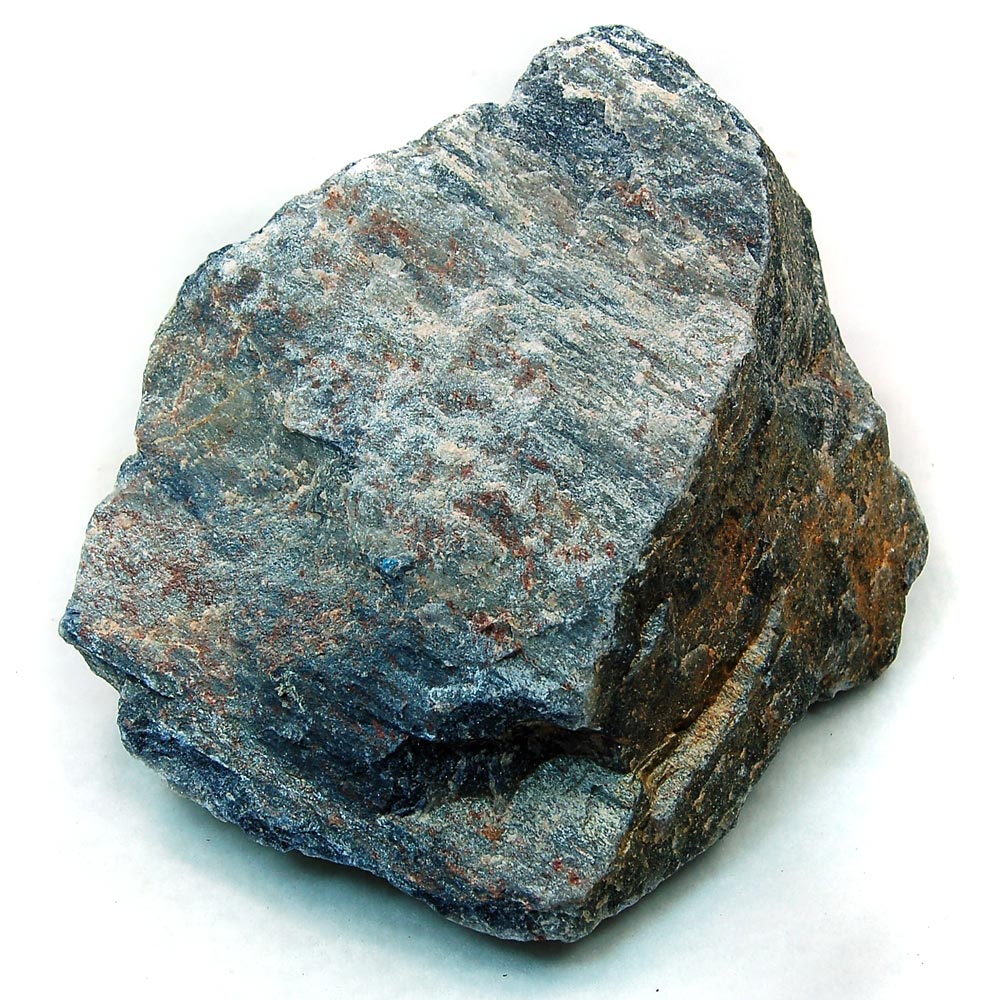 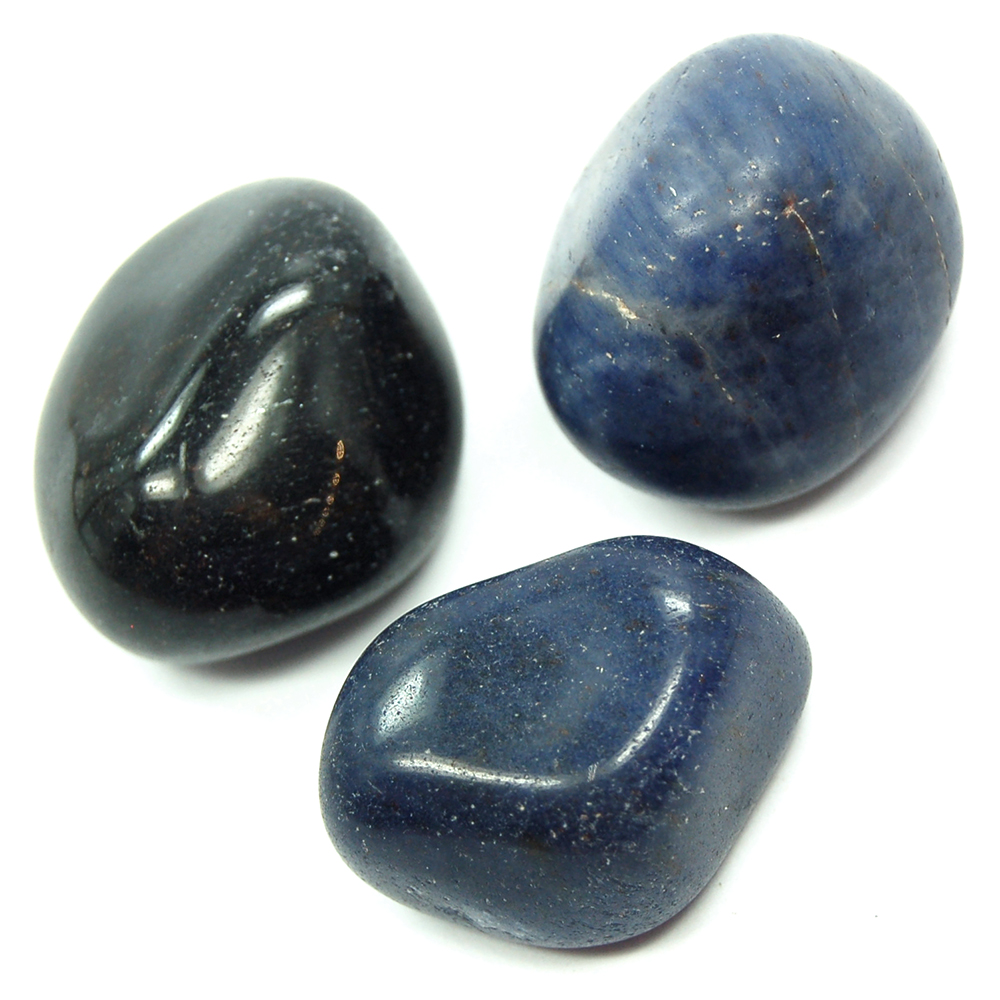 Blue Aventurine is the last in this series of our blue friends. Aventurine, also called Aventurine Quartz is a member of the quartz family (Silicon Dioxide) that is colored blue by the presence of Copper Silicates. Blue Aventurine contains another ingredient or two that sets it apart from Blue Quartz. The additional inclusion of Mica may add a shimmer, sparkle or shine.

So, Blue Aventurine is a member of the Quartz family (SiO2) Silicon Dioxide that is colored by a variety of Copper Silicates with the additional shimmer (shiller) of Mica an/or Pyrite. How dark or how light the specimen is will depend on the amount/content of these Copper Silicates. Blue Aventurine has a hardness of 7, and can be opaque to translucent. Aventurine can be found in Austria, Germany, India, Russia, South Africa and the US.

This article is written by Kristi Huggins, Author and Project Manager for Healing Crystals