April is the middle of spring for those in the Northern Hemisphere and the middle of Autumn in the Southern Hemisphere. It's a great reminder of the balance that exists - while one half of the world is awakening, the other half is preparing for the "hiberation". To me, April speaks a lot about balance and duality, not only when I look at what the Earth is doing but also if I look at what Easter means for many people - the death and resurrection of Jesus. I can find a new sense of appreciation for this month when I look at things this way, instead of focusing on the rotten jokes people can spread on April Fools Day.

It's said that we should always strive for balance but many of us don't do that as mindfully as we should. Most of the time, we are known to be pushing and bulldozing during the week until we can get to a weekend or holiday time (like Easter). Let April be a reminder to be more in balance, to complement the busy time with mindful relaxing and not social media scrolling the whole day long.

This month Lori Morrison is sharing with us an article about the Rabbit. We have all come to know and love the lil bunny rabbit that you see during April for Easter. If you've wondered about the deeper meaning to this gentle, beautiful animal, then you will love Lori's article. With Earth day happening on April 22, Nikki from Sol Path Tarot and Crystal Magick decided to share her grid which is specifically for working with tree spirits and to honor nature. So much of nature is being destroyed and there are not enough people who take time to love the beautiful nature we do have! I suggest taking some time to just sit with her grid image and feel love from your heart being blanketed around Earth.

What's happening in April at HealingCrystals.com:
To celebrate this beautiful planet Earth we call home, we are discounting our favorite earthy crystals from April 15-28, 2019! Get 33-50% off selected geodes, hematite, jaspers, tektites and agate! 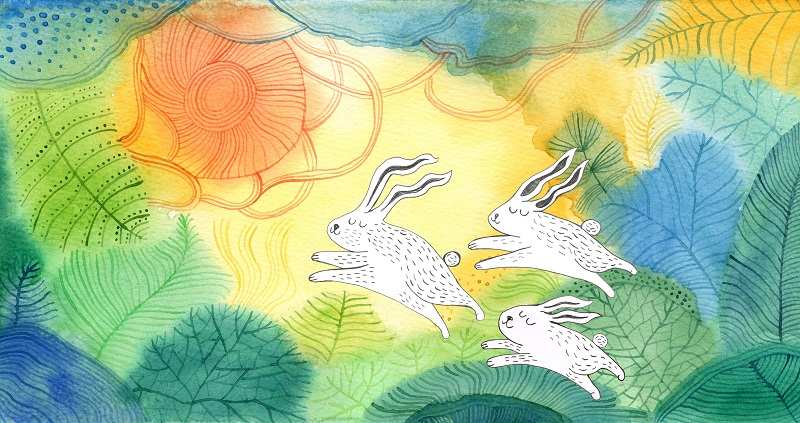 "We take comfort in the belly of the Mother, who brings us the magic of creation." - Rabbit

Rabbit is found throughout the world, living in forests, grasslands, deserts, wetlands, and meadows. It inhabits any environment that is conducive to digging burrows. Rabbit digs an intricate system of tunnels with many entrances and exits; and before entering one, Rabbit uses its whiskers to gauge the width of the hole so that it does not get stuck. Rabbit is small and furry with large ears and a tail that looks like a tuft of cotton. It hops instead of walking and therefore has strong hind legs, which it can kick with to defend itself. Rabbit comes in a variety of colors, which are mostly an evolutionary adaptation to its environment, perfect camouflage to hide it from predators. Mostly timid, Rabbit will either freeze to avoid drawing attention to itself or run from approaching predators.

Rabbit is a powerhouse of optimum senses ready to take on survival and defense, and because of this it represents immortality. It has the ability to see in a range of 360 degrees and excellent distance vision. It is farsighted, enabling it to see over a large swath of terrain and perceive anyone approaching. If it fails to see a predator, Rabbit will probably smell it first. Rabbit can hear high frequencies and is able to detect sounds from far away. Its long ears function like antennae so it can discern where a sound is coming from. Rabbit does not have a detectable personal scent, which also helps it stay safe.

In many cultures, Rabbit is a symbol of fertility, as it is a prolific producer of offspring. This connection to the circle of life is a lesson for all of us as to our ability to create on many levels. It is also a reminder of the inevitability of eternal life. Rabbit is a Chinese zodiac sign and represents a long life, tenderness, and love. The Chinese Moon goddess, Chang'e, had Rabbit as her pet. Native American tribes see Rabbit as a trickster and a real character that displays inappropriate behavior and has an inflated sense of self. The Hopi and the Shawnee have Rabbit clans and perform many ceremonial dances that revolve around Rabbit.

Many shamans have used a Rabbit foot as a talisman of luck and special powers of protection, especially when visiting the Lower World. Rabbit is revered in Irish culture, where legends tell of women who can shapeshift into Rabbit. In Mexican and Central American tribes, Rabbit was an image reflected on the Moon. The Mayan god Quetzalcoatl was so grateful to Rabbit that he illuminated its image on the Moon so we would all remember its goodness. Like the Mayans, Asians refer to the "Rabbit in the Moon," as opposed to the "Man in the Moon." The Moon symbolizes death and rebirth as it dies when it sets and is reborn again when it rises.

The Moon and Rabbit have much in common in regard to shadow and light, which is Rabbit's story of going into the darkness of its burrow and reemerging into the light. The Moon is a symbol of conception and pregnancy, and tied to parallel agricultural moments, like the planting of seeds. Parables featuring the Moon and Rabbit describe the ebb and flow of life, as well as principles like not clinging to outcomes and instead supporting inspiration. Mark Twain once wisely stated, "Everyone is a Moon." He meant that we all have a dark side. As a Power Animal, Rabbit is a steady companion to take us into the dark when we must search our souls for truth and light. By harnessing the energy of the Moon, we can see Rabbit there, the mother of the heavens ready to fill us with the invigorating power of her feminine energy.

White Rabbit is an important symbol for the shaman, it often means that a healer is to be born, serving as a white light that will transform the hearts and minds of those that live in darkness. It is also a sign that a major transformation is coming quickly. From the famous book Alice in Wonderland, the meaning of the journey is that down the Rabbit hole is a place to go for the true quest of knowledge. White Rabbit encourages Alice to take a chance to go to another world. When things seem confusing or desperate, White Rabbit shows up to encourage us to move forward into the unknown.

Rabbit is about embodying quickness. Having a quick mind and being capable of quick reactions or responses means that your intuition is in charge of you. Choose the first answer that comes. Avoid getting bogged down in analytical thinking as it is rare to be wrong on your first response. Sometimes we regret not heeding our initial brilliance. Overanalyzing decisions feels like whisking the egg of thoughts into a scrambled mind.

Call in Rabbit for:

Planting seeds for a new project.

To develop appreciation for your sensory powers.

Trusting the friends that you meet on your journey; they are all teachers, no matter what their messages.

If Rabbit comes into your life:

You may be very fertile—ready to conceive an idea or a family.

Do not always feel you have to be on alert, some days you just need to trust that all is well.

Release any fears that are keeping you frozen in place.

Mineral: Tanzanite resonates with Rabbit because it is a stone of great protection, something the often vulnerable Rabbit would appreciate.  It is a stone that reduces fear in crisis and helps to rebuild trusting yourself and others. It stimulates resourcefulness. It is extremely high vibrational like the Rabbit who is a guide to the underworld, a place of nature spirits. It supports the ease of moving into altered states. The color blue is linked to Rabbit as it is representative of the beginning of life and fertile thinking and emotions.

It is estimated that the Rabbit species has more than 40 million members.

"Follow the white rabbit" is a reference to Lewis Carroll's book Alice in Wonderland. It means be willing to respond to an unexpected invitation or calling and make a deeper search for the meaning of life.

For the ancient Aztecs, Rabbit was a symbol of drunkenness because of its wild sexual promiscuity.

Take me down the rabbit hole. I promise to trust what I find there

by Nikki Piper from Sol Path Tarot and Crystal Magick 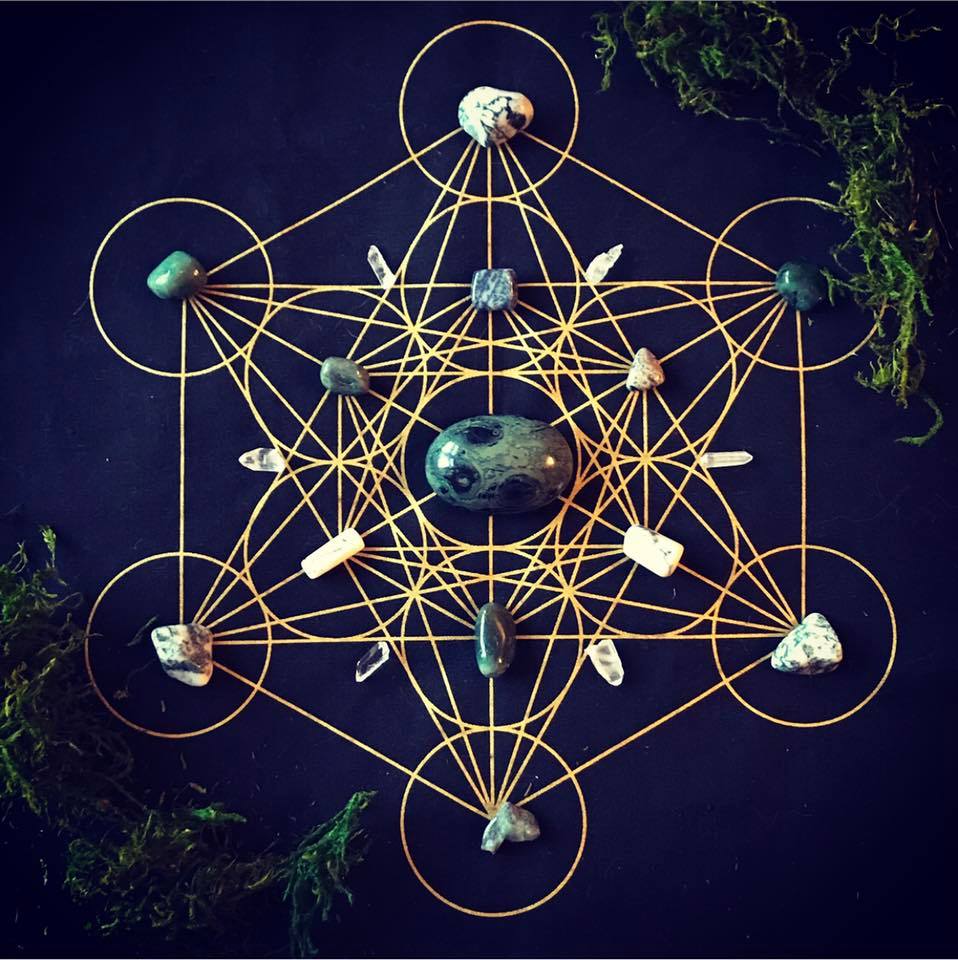 “Trees exhale for us so that we can inhale them to stay alive. Can we ever forget that? Let us love trees with every breath we take until we perish.” - Munia Khan

A grid for working with the spirits of the trees, to send healing to the forest, and to honor nature.

Using Metatron’s cube for the grid pattern: Kambaba Jasper for the center stone, setting the intention.

A 5 minute YouTube video by Tara and Lourdes about healing crystals that work with the energy of Easter. Crystals featured in this video are: Bloodstone, Emerald, Chrysocolla, Rose Quartz, Pink Calcite and Chalcedony. They lend to the playfulness of Easter, namely eggs, chocolate and bunnies. These healing crystals can also reflect the more serious side of Easter, being the death and resurrection of Jesus. Never forget that one person CAN make a difference and irrespective of what challenge you are facing, you are supported and loved. Watch it here! 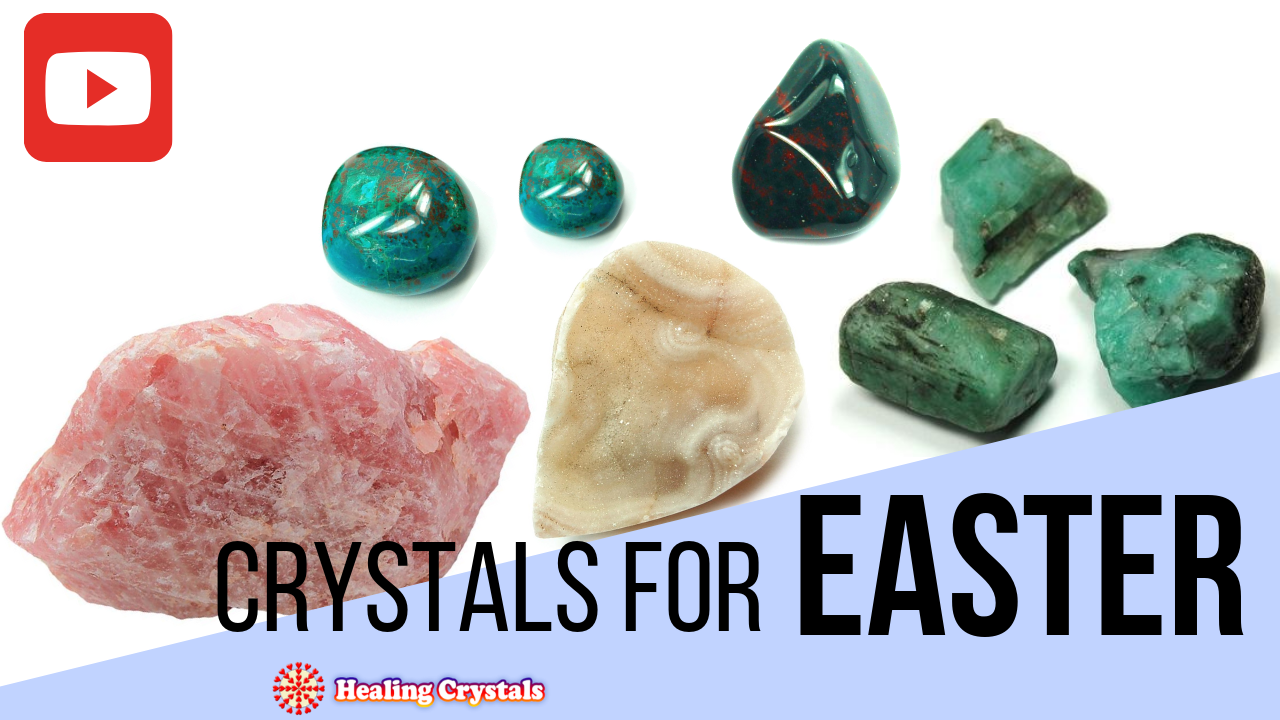 If you want to receive our monthly newsletter via email in your inbox, sign up today!