Green Chlorite is a green inclusion within Clear Quartz crystals that may occasionally have cream and brown inclusions, as well. Green Chlorite in Quartz has a glassy or pearly luster and may present as dull. This stone has a smooth texture and can look foliated.

Green Chlorite in Quartz is a powerful healing combination. The Quartz amplifies the purifying, detoxifying properties of the Chlorite making it one of the best crystals to use for physical cleansing. Chlorite not only works with the physical body, but the auric body as well. Chlorite will help to cleanse the aura, chakras and energy meridians. Chlorite is a great piece to use when there is excessive anger or frustration, gently removing and dissipating the energy. Chlorite in Quartz will help to resolve issues of the heart and remove blockages and resistance that will allow one to acknowledge, forgive, release, and move forward.

Chlorite is also a wonderful stone to use to cleanse the environment, a sacred space, or home/office. With Quartz, Chlorite can help to clear negativity. It is recommended to use a Chlorite in Quartz Tower or natural Chlorite in Quartz point placed point down in the toilet tank to energetically cleanse an entire home.

Chlorite Towers will make wonderful grid companions, especially when placed in a healing room or sacred space. Place a Chlorite Tower in an office to keep the area free and clear of cluttered, chaotic or negative energies. Healers, Chlorite in Quartz is a must have for your healing crystal inventory. 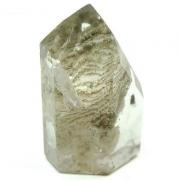