Often called the “earth rainbow”, Banded Agate is a healing stone for body, mind and spirit.  It can increase concentration, honesty and memory.  Banded Agate also protects the wearer from psychic attack, thereby preventing negative energy from harming you.

Agate is formed with bands of microscopic quartz crystals. It is a variety of Chalcedony. Agate is a grounding stone as well as a spiritual stone, allowing for one to bring their spiritual experiences into their everyday reality. Agate is believed to improve mental functions and can help where issues of clarity and stability are concerned.  Agate is also helpful in overcoming negative emotions by bringing love into the chakras.  Although they work very slowly and deliberately, this gentle nature of Agate helps it to have a lasting impact. 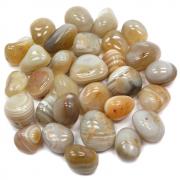 Click here to see all items related to Banded Agate in our online catalog.